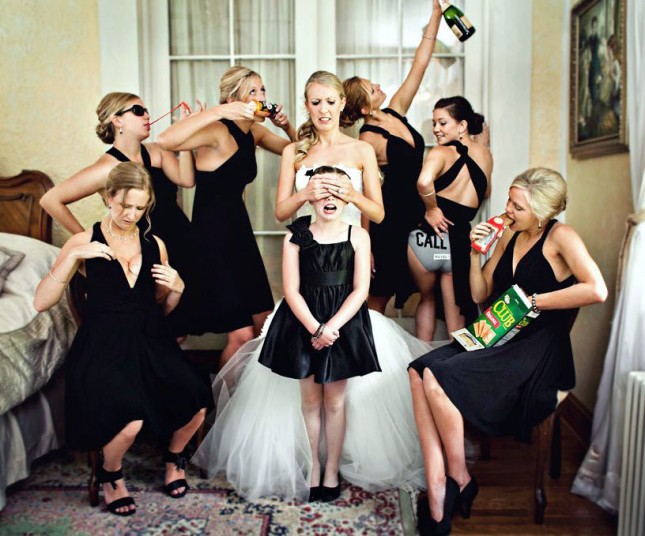 Confessions Of A First-Time Bridesmaid

Being a first-time bridesmaid can be really scary – especially if you are in your late teens and have only attended about two weddings in your whole life! One, I was a flower girl aged five – my cuteness could back me up if I faltered. The other, I had an absolute nightmare finding an outfit, got flaming drunk and flirted with the groom’s colleague – oh the shame. Based on those experiences, I was hardly what you would call a poster girl for my pal’s first choice as Maid of Honor. Nevertheless, she (who shall remain nameless) chose to accept the risk. But I bet she wishes to this day that she had taken out an insurance policy.

Lets just say it was a learning experience, a memo on what not to do in this trustworthy role. I shudder with embarrassment every time I look back at the whole process and think to myself what the bloody hell I was thinking. It was as if a confetti induced fog had descended before my very eyes. I was stumbling around in the darkness and breezed through without a care in the world as to what a wedding actually involved. Oh, the blissful joys of naive youth. Take heed from this wisdom which I am about to bestow upon you. Based on my own cringe-worthy experience, these are essential tips for every first-time bridesmaid.

You’d think this would be a given seeing as you are meant to help the bride by being the most reliable, best friend ever. But that all fell to pieces when the curves of the wine bottle were seducing me after a takeaway on the eve of her nuptials. She drank too, so technically I didn’t start our little date with the devil. Fast forward 12 hours. She sat in the limo with a look of despair on her face as the driver threw daggers that would pierce the skin of an elephant. All while I stood precariously in a ditch throwing up the contents of the previous night. An emergency stop on the way to the wedding venue. So not ideal. And I was on pints of water for the night.

Moral of the story – drinking before the wedding is a big no-no.

Stand Up To The Bridesmaid Bully – You Won’t Regret It!

I didn’t stand up to her and it’s my biggest regret.

Ten years my senior and a people pleaser. I could see her from the offset. If St. Patrick was banishing snakes from modern Ireland, she would be head of the pack. What I failed to do was stand up for myself. I let her get away with those back-handed schemes and narky comments, all while her lips curled up into a menacing smirk.

It started when she suggested in front of the bride that we both bond over shopping for hen party accessories. I should have known better. Every suggestion I made was shot down with military precision and when D-Day finally arrived, every hen item magically made it to the hotel room – purchased by her. It looked like I hadn’t even opened my purse strings to buy a packet of willy straws. Witch. She was not to be trusted.

On the day of the wedding, she barreled me out of every mandatory Maid of Honor duty. Plus she huffed and puffed throughout the ceremony at every move I made. The CIA wouldn’t have even kept that many tabs on me. If I ever see her before 2050, it will be too soon.

Don’t Be Afraid To Ask For Advice

At such a tender age, I was clueless to the etiquette involved in attending a wedding, not to mention being a member of the bridal party. I was too shy to ask how much money is appropriate as a wedding gift or whether the bridesmaids are required to pay for their own hair and make up. No question is too silly and by asking at least you can plan ahead and make better, more informed decisions.