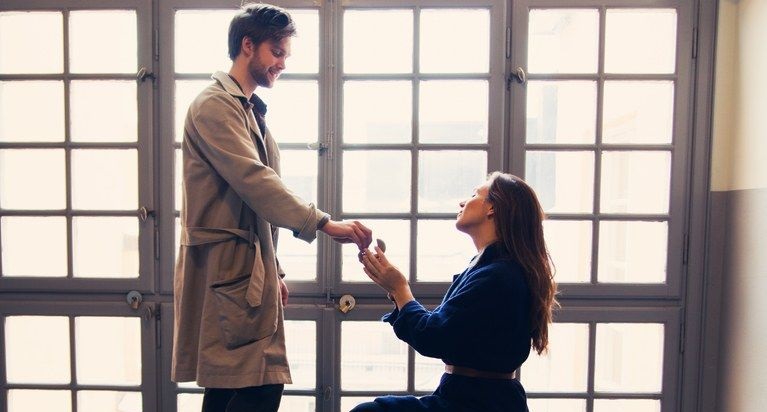 Home » Blog » Planning » Proposal » Proposing on Leap Day, Should You Take The Leap?

Proposing on Leap Day, Should You Take The Leap?

It’s official; 2020 is a leap year, which means that it has 366 days as opposed to the typical 365 days every other year has. That extra day is, of course, February 29th which has traditionally seen women proposing to men. Now, of course, it is 2020 and a woman is capable of asking for a man’s hand in marriage any day of the year she wants but traditionally in Ireland, this was assigned to a leap day.

Apparently, during the fifth century, St Brigid of Kildare complained to St. Patrick that women had to wait too long for men to propose. In response, St. Patrick decreed that women could propose to men on this one day in February during the leap year.
What followed after this was the Irish monks who brought this custom to Scotland. This is where the Chieftains ruled that any man who declined the proposal on this day would have to pay a fine.

Now, this law was allegedly passed by an unmarried Queen Margaret of England, who according to records suggests she was just five years old at the time…

And amidst all of her youth and knowledge, the five-year-old Queen further decreed that any woman proposing on this day in February had to be wearing a red petticoat.

If you’re seriously considering in giving this old tradition ago, here are some reasons why we think you should;

It’s not 1965 anymore. It’s no longer a strict tradition for the man to propose so step up. The ball is in your court.

2. You’ll have to wait another four years

According to our calculations. the next year leap year is in four years time. So, if you miss your shot this year, you’re going to be waiting. That is of course if you’re set on proposing during a leap year(you could of course just propose to him tomorrow, if you wanted to).

3. It will make one hell of a story

Not just something to tell the co-workers but, the future grandchildren too.

4. You can pick your own engagement ring

You’ll be wearing it on your finger forever, after all.

5. You could be doing him a serious favour

Trust me on this, proposing is a scary thing to do, for both men and women – especially if you haven’t been previously discussed marriage plans. You’d never know what’s going on in his head, he could be absolutely freaking out. Who knows, you proposing to him could possibly be the best thing to ever happen to both him and you.

6. The wait will be over

No more leaving hints, no more getting excited every time he goes to tie his shoelace. You’ll no longer have to wait to be each other happily ever afters.

Ready the cavalry, we have an excuse to party.

Love is a risk we take with our hearts, take the leap and let us know how you get on. Just remember we at WeddingDates will have your back each step of the way. From searching for your ring to planning your wedding (with our new Planning Portal of course). You got this girl!